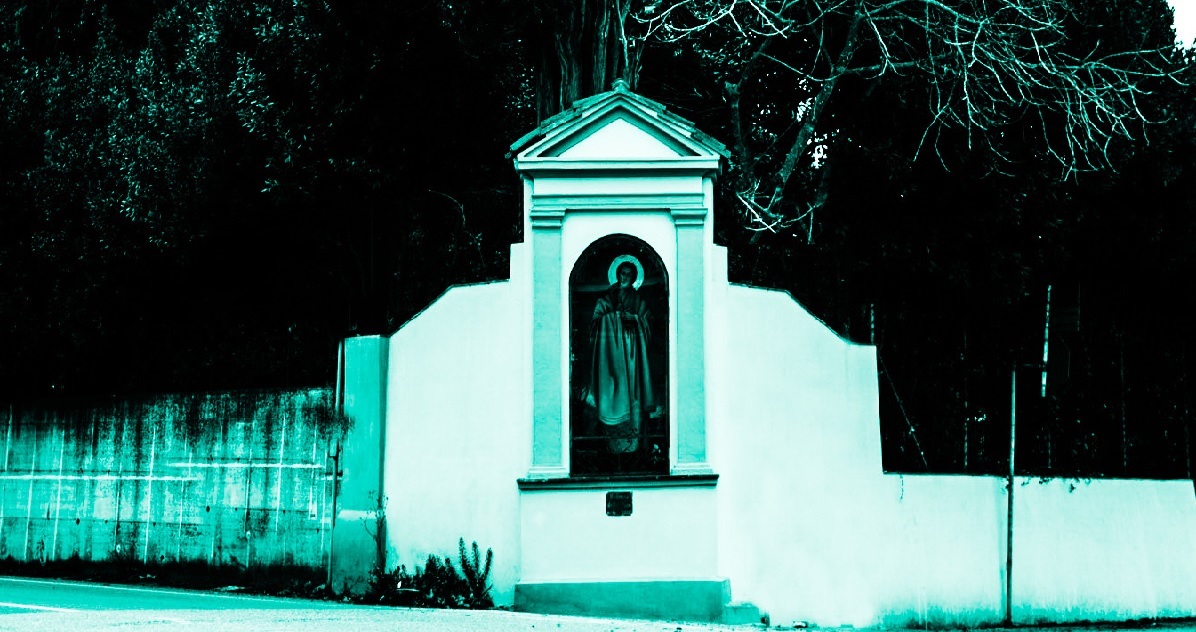 In the town of Santa Croce sull’Arno in Via di Poggio Adorno, suburb Cerri there is a religious icon dating back to the century XIX dedicated to the Immaculate Conception. The Madonnina is located on the edge of the road near the intersection of  Via di Poggio Adorno, Via del Bosco and Via Lungovalle.

For the travelers who once crossed the dangers of the forest along the path of the Via Francigena, the niche represented an important reference point. When they saw it they knew they had arrived “at the bottom of the coast”, where Gusciana flows, today called Usciana, the canal that comes from the Padule of Fucecchio and crosses this valley until it flows into the Arno river at Pontedera. At that time, without bridges, the stream crossed through a ford. Later a small canal control building was built with a guardian inside. Only a few years later the bridge was built. It is said that Beata Cristiana to escape from the brothers who wanted to punish her for her generosity, escaped from her house to Usciana and not knowing how to cross it stretched out her apron and believed in the help of the Lord. So Oringa de Menabuoi saved herself and fled to Lucca, a disastrous departure for a final full of glory, but this is another story and I’ll tell you another time. But let’s go back to our niche. The first historical notes, as well as the first photos date back to the early ‘900. It is interesting to note the florid foliage of the cypress behind the Madonnina. The fact that this tree was already so voluminous, suggests that this religious corner was also present many years before. Before the last restoration in 1987, the icon appeared as in the image below. Proven by time and two wars, the fresco was about to disappear altogether. In 1987, the painter Enrico Fornaini took care of the restoration by Mrs. Liana Lami. Today, 40 years later, our Madonnina has found a new owner who has great plans for her. Soon the new table will be placed with the replicated image of the fresco by Fornaini himself, waiting for the Belle Arti to follow to the recovery plan of the original fresco.

nextPortals where we are present