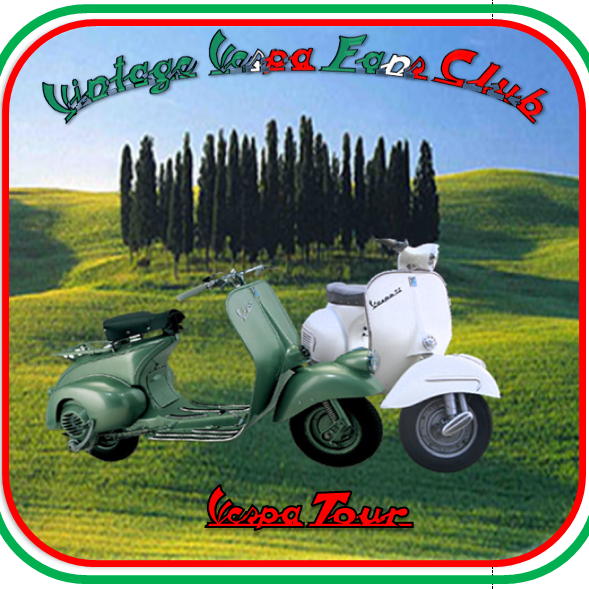 Our partner Vintage Vespa Fan Club is able to organize your Vespa tour for a unique experience.

Below are two of their best-managed initiatives.

TOURING ON A VESPA BACK INTO THE RENAISSANCE TIMES going through the period of the Bonaparte family, Leonardo da Vinci and the Medici family.

On our vintage vespas, we will lead you between these 2 centuries , admiring places and buildings which have contributed to write the history of that period.

We start from the buildings of the sixteenth century of the Bonaparte family of San Miniato, related to the famous NAPOLEONE BONAPARTE who during his 1st Italian military offensive came to visit his canonical uncle in San Miniato (this event has been represented by a painting which belongs to Cassa di Risparmio di San Miniato bank).

We carry on towards Vinci with the old castle which dominates the village and after few kilometers we find the natal house of Leonardo. Going up the
road for few more kilometers we reach the church of Santa
Maria Assunta where a holm tree aged over 250 years

old dominates (this tree is registered in the Tuscany monumental tree register). From this spot we can enjoy a breath-taking panorama of the medium Valdarno valley and on very clear days we can see as far as the Tuscan archipelago.

On the way back we will stop to visit the Medici Villa in Cerreto Guidi. This villa was built as the hunting house for the Medici family due to proximity of  Fucecchio marsh land and Montalbano mountain, both places are rich of fauna.

Finally we will visit the place where in 1432 the famous battle of San Romano took place. This battle was immortalized in 3 paintings by Paolo Uccello and belonged to the Medici family. Nowadays the three paintings are shared between the museum of Louvre, Uffizi Gallery and the National Gallery in London.

You might now wonder what a name of a village got to do with the most famous
marionette . Actually they are related quite a lot as reliable signs say that Carlo Lorenzini known as Collodi (name of the village where his mother was born) took inspiration from different names of these

places during the draft of his well-known fairy tale.

And now on board of our vintage vespas we are going to take you to visit these places finishing up in the ancient village of Collodi.

Let’s see the main coincidences among the fairy tale and the places around San Miniato Basso.

First of all how can a name such as Pinocchio being invented if this name has never been heard before ?

Here is the first clue : Carlo’s father worked for few years as a cook for a family in San Miniato Basso – Il Pinocchio, therefore Carlo knew these places very well.

Second clue : When Geppetto decides to call the marionette as Pinocchio, he says : I have known a whole family of Pinocchi , Pinocchio the father, Pinocchia the mother and Pinocchi the children and they were all lucky….. It’s evident that he is referring to a family living in Il Pinocchio.

Continuing our research for other clues, we find a connection with the prisons of San Miniato (Alto) and in particular in the episode where Pinocchio is arrested and put into the prison of the village called “Foolish people” and then released by the order of a young emperor who was reigning in that village.
Indeed the emperor Federico II of Svevia had reigned in San Miniato and the inhabitants were also called “foolish people” that is gullible people as it is known that when the citizens of Empoli attacked San Miniato at night by tying a small light to the neck of one thousand goats , the people from San Miniato got frightened by such a strong army and surrendered straight away.

More clues are available….but we will give you them during our tour that will lead us to the ancient village of Collodi through a road that twists and turns between the olive groves and by giving us a breath-taking panorama. The village still keeps the original medieval structure with the ancient doors of access , lanes made of stones and sighting towers.

On the way back we will stop to see the “witches oak tree” which is supposed to be more than 600 years old and that the local legend reveals it as the tree that inspired Carlo Lorenzini for Pinocchio’s hanging.

Have a good time !

previousPortals where we are present